I don’t often see the words “Top Gun” and “embroidered” in the same sentence. The combination brings to mind a cut-throat needlework academy – a place where high-flying crafting hopefuls train their way to the top, and break all the rules doing it. But, I digress. This week, I finished the embroidered knit project I had been working on for February.

The beau’s cousin, J, recently asked if I could knit him and his best friend a pair of matching caps. Children of the 80s, J and his pal are both big fans of the 1986 film Top Gun. I admit: what I know about the plot comes very second-hand. I haven’t redressed my lack of knowledge by watching it, but in the film “Iceman” (Val Kilmer) and “Maverick” (Tom Cruise) are fierce aviation-school rivals who develop a loyal wingmen friendship by the end. They also happen to be J and his pal’s favourite on-screen buddies. The knitting request was simple: could I knit 2 caps – an “Iceman” and “Maverick” hat for J and his pal, respectively? Knowing little about Top Gun fandom myself, I liked the idea of making something in the name of friendship while trying some new knitting techniques.

Given full creative hat-design leeway, I thought that using the movie logo would be 80s nostalgic while channeling a little bit of the irony of a knit-embroidery tribute to a movie about fighter pilots.

I used Stitch Fiddle to graph my design out. It allows you to enter your gauge (over 4″/10 cm) to render a grid that reflects your particular tension for making colour work charts. Stockinette stitches tend to be a little wider than they are tall. Because of this, using square-box graph paper to plan a design may result in a slightly skewed final project. Programs like Stitch Fiddle allow for a better idea of what the finished design will actually look like. It’s simple to use; rows and columns are added and deleted with a mouse click. It’s like Excel for your DIY colourwork, embroidery, and cross-stitch projects. All I have to say is “yes!” to this indispensable online tool, and others like it.

Less exciting was weaving in all the ends. I learned late in the game to use a single long strand to embroider multiple letters, rather than cutting my strand after each character.

Also, I personally find it best to work the duplicate stitch from the bottom to top, starting at the base of a letter, then working up and across. It’s just a little neater that way, I find. 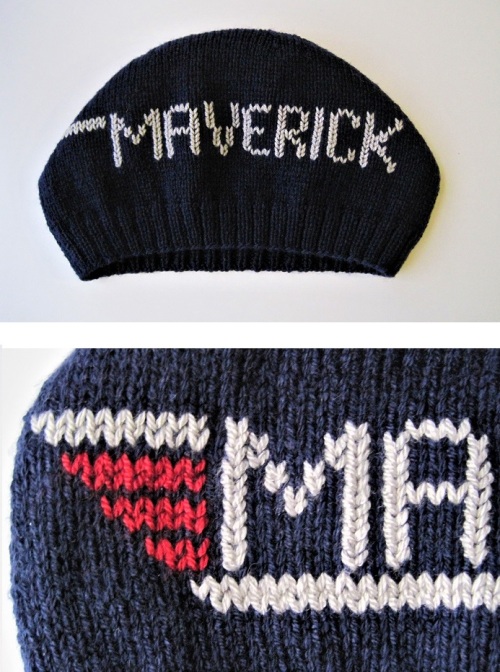 All in all, this was a fun project. It’s hard not to see blank stockinette surfaces as a canvas for some stitchery waiting to happen. It was a surprise for the knitting to unexpectedly serve as a gateway to embroidery.

To embroidering, and matching hats…and friends!