In the first week of March, I started work designing and making a 2nd felt figure. After my first one, I was on a bit of a felt-doll kick and decided to run with it.

The idea for this doll came unexpectedly, but once it arrived, it didn’t let go. One night, while looking aimlessly at the faux-marble designs on our kitchen floor tiles, I saw the face and figure of a little doe in the marble-y striations (my childhood habit of cloud-gazing, it seems, is following me into adulthood). This little doe caught my imagination. I knew then and there that she would be the next doll.

On reflecting further, there was good reason for my little deer vision. My partner and I live near a forest preserve. Last summer, we regularly went on hikes through the more heavily wooded areas, off the path. There, one encounters many little worlds. There was, for instance, the place we called “Frog Central,” which was just that: a nutrient-rich pond covered entirely by luminous green, seed-sized duckweed leaves; its busy banks were always a favourite frog and turtle hangout. What I still remember vividly, though, were the encounters with deer: spotting a lone and roaming stag, twice and, several other times, crossing literal paths with a doe and her fawn, trailing behind. The city makes it easy to forget that we share our world with other creatures who, like us, are simply trying to go about their lives, undisturbed.

On March 4th, I started to draw out different paper templates. By the 5th, I was cutting out my pieces and threading my needles. I was driven by a lot of curiosity and helped by making a lot of mistakes (some which I kept on the FO, like the different stitch patterns on the doe’s arms, as a reminder for future dolls). 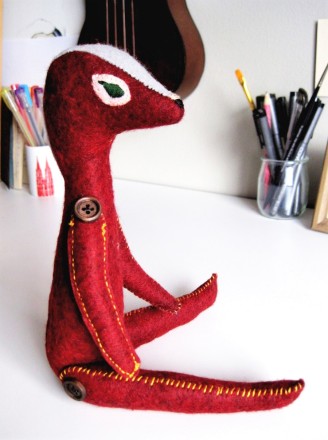 A Dress for Spring

By the following week, the deer was sitting for a dress-fitting. Coraline’s miniature-knits were still fresh in my memory (this dress is huge by comparison, of course).

I generated a very minimal design and, after knitting up the dress, I was reminded of the advice given by the instructor who taught my college class on painting fundamentals. She was a professional landscape artist who had an irreverent and humorous teaching style (and inducted us into painting by having us build and stretch numerous 16 sq ft canvases in the studio). Early in the course, she told us “When you find yourself ‘decorating’ your work, stop!”

I have never been good at following this advice. At my core, you’ll find an inveterate “decorator.” I learned this early on: in another art class, we were asked to make a simple “fetish object”; while the other students’ works were nearly all very interesting conceptual objects, I arrived to our critique with a glass bottle that I had fully bedazzled with multi-colored rhinestones and acrylic paint. I felt like I’d missed the point of the assignment! (and discovered, in that encounter, the presumed and often discouraging hierarchy between “art” and “craft”).

I’m recovering my love of embellishment, however, so I had to add a little something extra to this tiny dress. I tried to practice some restraint, though (no rhinestones!). The X’s and O’s on the yoke are my take on Fair Isle patterning. The dress is knit from bamboo yarn; I added sequins to complement the bamboo’s natural luster. The dress is designed to catch those Spring-time rays. 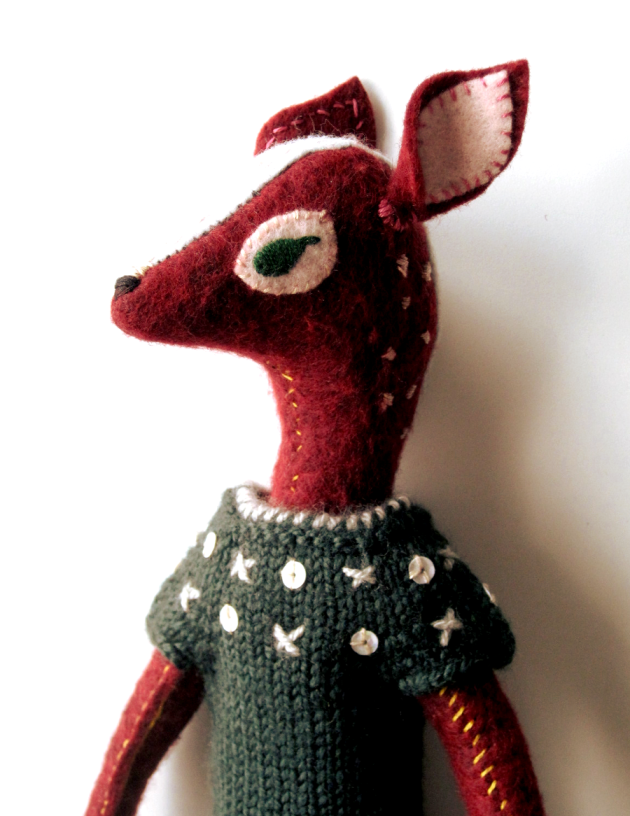 I hope that this week finds you like this doe – basking in the glow of a long-missed sunbeam.

To Spring! (and to unseasonable, un-Spring-like weather here in the Midwest. I’ll take the sun any day).